Singing Welcoming the Pope in Rhoose 1982

Presentation to Mair in Waterford   -Tour to Southern Ireland 1995 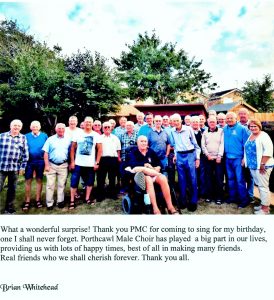 Dil was a member of the Choir from the early days , a stalwart of the bottom base section. He died in 2003 leaving a considerable bequest to the Choir. The money was used to supply the Choir with new uniforms. It was decided at that time to commemorate his generosity by making an annual award to a local musician who was about to start further education in music. The Dilwyn Evans memorial award has been presented every year since.

In 2014, the award was presented to Charlotte Skidmore, who was also recommended to the Welsh Association of Male Choirs as a candidate for their award. We were extremely pleased and proud when she was selected for the award. In addition to an enhanced financial benefit, she was invited to perform as a solo artist, at the massed choirs concert in the Royal Albert Hall, in May 2015, which she did with great aplomb.

Charlotte has recently been invited to join the cast of Phantom of the Opera and will start rehearsal soon. The Choristers of Porthcawl Male Choir are extremely proud of her achievements and wish her a successful and happy career.

Ted was a founder member of the choir and served as treasurer for 28 years. He was a tenor who supported everything the choir did and on many occasions was the organizer. His relaxed and pleasant demeanor made everything he did look easy. Most of the choristers, particularly the longer serving members, will tell of enjoyable experiences involving Ted. We will never forget him.